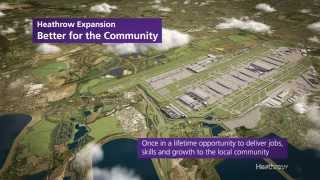 There have been strong arguments, for and against, expanding either Heathrow or Gatwick - and also for doing nothing.

Prime Minister Theresa May has given ministers the freedom to oppose the decision - Heathrow expansion has been fiercely resisted by the Foreign Secretary, Boris Johnson, and the Education Secretary, Justine Greening, among others.

Conservative MP Zac Goldsmith has previously said he would resign his west London seat and trigger a by-election if Heathrow got the go-ahead. His constituency association has said he intends to honour his pledge.

In making this announcement, the economic case put forward by many business groups for Heathrow - especially in the wake of the Brexit vote - seems to have won. However, many campaigners against a third runway reckon that increased traffic pollution from vehicles associated with a bigger airport is the issue that could stop Heathrow expansion completely.

The problem of building a new runway to serve London is that the south-east of England is densely populated, and wherever a new runway is built, thousands will be affected.